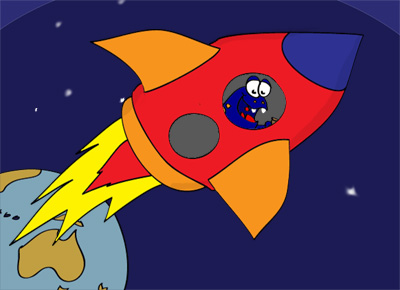 What the Demonstration Does:

This demonstration relies on a chemical reaction to ‘blow’ the lid off the canister. It is rather dramatic and bound to get a few ‘Wow!!!’ type responses.

1. Place the ice cream container lid on the ground in a clear open space.

2. Pour approximately 1cm of water into the film canister.

3. Place the Alka-seltzer tablet into the film canister and put the lid on very quickly.

5. Think Pair Share – How do you think the rocket works?

The water causes a chemical reaction with the Alka-seltzer tablet that produces the gas carbon dioxide. The carbon dioxide continues to be produced but it has nowhere to go and as a result, builds up pressure in the canister. Eventually, the pressure becomes too great and 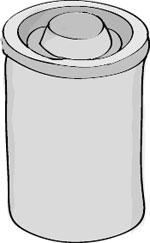 NB Canister must be like this one or you just get a few bubbles under the lid and no pop!

the lid is pushed off.

– Which went higher the lid or the canister? Why?

– Try adding fins to the rocket. Does this have any effect on the height or direction of flight?

– Add a ‘nose cone’ by creating a small cone from paper. Does this have an effect?

– Experiment with different levels of water and a stopwatch to see if you can work out how long until it blows.

– Create a two-stage rocket by taping two canisters together.

– Substitute the Alka-seltzer tablet for bicarbonate soda. Does this give better results?

Little Anecdote – If you do this activity at the beginning of the year & manage to leave a mark on the roof, the kids will proudly recount the story of how the mark got there to any visitor will listen 🙂